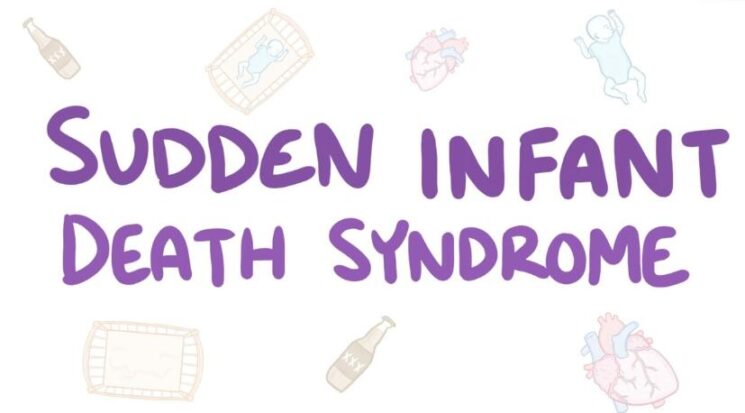 For each year, there are around 3,500 infants die in sleep, for various reasons. Some die for suffocation, some die for sudden infant death syndrome, known as SIDS.

No one would suffer the pain of losing babies. That is why you need to get basic knowledge and solutions as precautions.

Symptoms of SIDS still keeps as a myth nowadays, but there is evidence showing that multiple actional movements can reduce the risk.

SIDS refers to sudden infant death syndrome, it happens during sleep, which is also known as crib death. It is an unexpected yet unexplained death happened on a healthy baby. Some suspects that it relates to the infections of the brain controlling waking from sleep. It’s worth noting that SIDS is different from infant shudder syndrome.

The cause of SIDS still remains a mystery. But there do have some factors contributing to death to some extent. 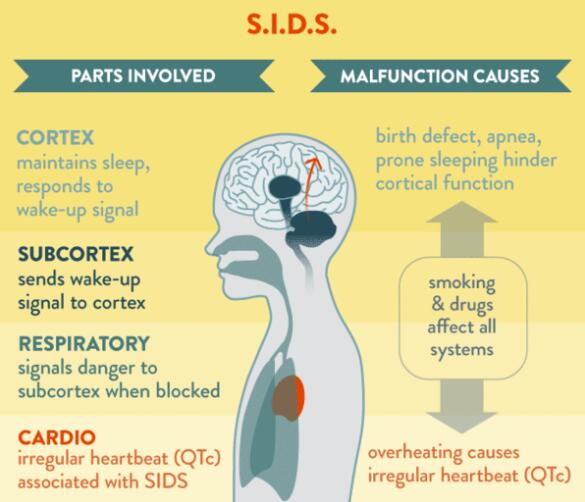 Bad sleeping positions lead directly to the suffocation or even death during sleep.

1. Sleep on the stomach cause choke

Since 2015, experts have launched a “back to sleep” campaign. It highly criticisms the stomach sleep, getting baby into the danger of being choked down.

Soft thing around babies can be a dangerous thing, for the baby faces the danger of being covered by mattress or pad.

3. Share a bed with a baby isn’t a good idea

It is a must to keep an eye on the baby for 24 hours and to keep it sleep in the same room. But definitely not the same bed!

Overheating during sleep is also a major cause of sudden death syndrome. 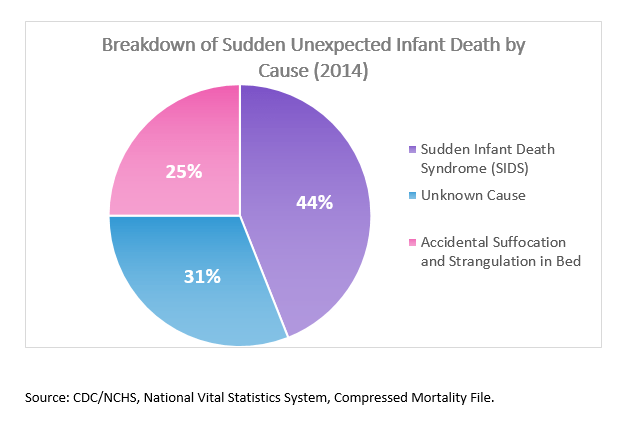 The condition of the mother in pregnancy also causes sudden death syndrome of the baby. 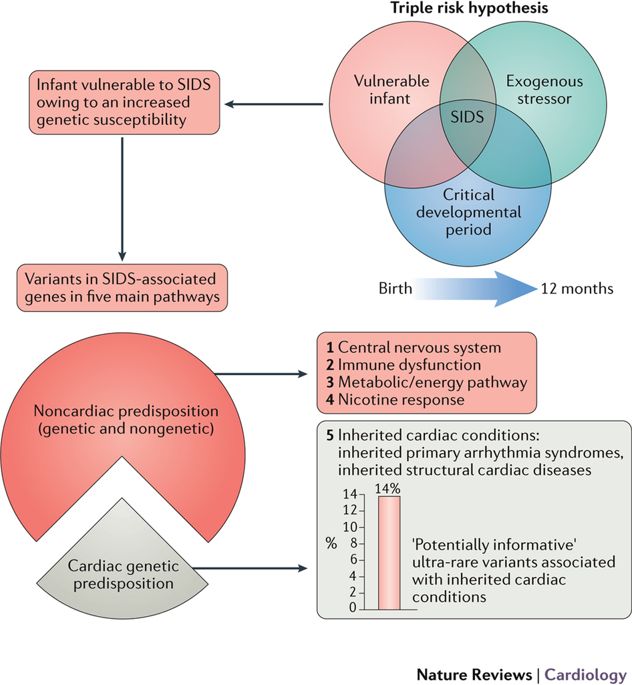 There is no evidence that necessity preventions can kill the SIDS in the buds directly, but it does significantly reduce the risk.

Always sleeping on the back

When the baby is sleeping on his back, his airway is always unobstructed. Thus, you should always keep your baby sleep on the back, remember, back to sleep during the whole first year after he was born.

And try to abandon the baby device that sooth baby with stomach sleep. (Except for tummy time use.)

Insist on sleep on a hard crib

A soft crib or mattress is not only harmful to bone development of the baby but also place the baby at high risk of sudden death.

Throw all the extra cushions away from the crib

The plush toys and extra beddings, such as pillows and pads, easily block baby’s airway.

Infant baby needs to sleep along with parents under a supervisor, thus experts strongly suggest him to sleep in the same room with parents. However, do not get it wrong! You should never share the same bed with him, for adult’s bed is not designed for babies, they may fall off from the side.

It is believed that breast-feed can do a great help in preventing SIDS. So you should insist on breast feed as long as you can.

Discard baby monitor or other devices

Do not waste your money on the so-called baby monitors that boast to reduce the possibility of SIDS. All you need to do is to monitor with your own eyes.

Pacifier can be help

A baby pacifier can be quite helpful in reducing the rate of SIDS. You can use it after the age of 1 month, or he may have nipple confusion.
Do not force him to use it, and once it falls off, do not put it back in his mouth again. It serves as a good soother to be put in mouth. So, keep it clean! There is no need to cover it with sweet things, the plain pacifier is the best.

Regularly immunization is a must

In early of the years, some claim that immunizes a baby may contribute to death in sleep. Well, it proves to be nonsense. According to the annual test, immunizing baby with vaccination can lower the rate of SIDS to 50%.

Use baby gear as a soother instead of a sleeper

Apart from crib or bassinet, all other baby gears are not designed specifically for sleeping (While some may be suitable for a nap, but not ideal for long time sleeping.) Such as baby rocker, swing, or car seat. Once the baby falls into sleep in such gears, you should move him to bed as soon as possible.

Thus, it does help a lot in taking safe sleep.

And the followings are the treatments or tips on safe sleep:

Why Can’t Baby Sleep on Stomach 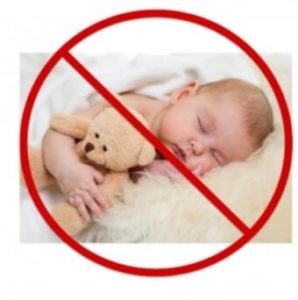 Sleep on the stomach may reduce the possibility of getting flat head syndrome, but meanwhile, it causes SIDS directly. When you put the baby down on the belly, his face is easily get covered by beddings, which means the airway is blocked. Moreover, sleeping on the stomach makes baby breath in less fresh air but more carbon dioxide, which leads directly to the infection of brain development.

Then you may ask, can I keep my baby side sleep?

SIDS is a sudden death happened during sleep for different reasons, mostly related to suffocation. Thus, during midnight, most parents are sleeping soundly and cannot be aware of the danger in time.

#2. Can A Baby Die of SIDS While Being Held?

Yes. According to the data, 94.7% of babies die in midnight for SIDS, but there is still a small amount of number die in the daytime while they are awake. When holding a baby, you should never cover the mouth and nose of him, keep his airway unblocked all the time. And never get him overheated.

Stomach sleep has a higher rate of getting SIDS, but it does not mean baby cannot lie in his stomach. When he is awake, you can place it on the belly to get tummy time, which helps him strengthen the muscle of the upper body.

There is no direct relationship between Immunization and SIDS. Plus, getting suitable immunization in the recommended age is a must.

This is perhaps the most problematics myth of newborn baby. Back sleep does add much pressure on the head, but it is not a single cause! The tummy time is the key solution to solve the problem. Besides, you can keep baby stay in an upright position when he is awake. Changing baby’s head directions constantly during sleep is also a good choice.

Back to sleep cause choking.

There is no evidence showing there is a relationship between the two phenomena.

Side sleep is a good position for baby.

Side sleep is as unsafe as belly sleep, for baby is at large risk of rolling over to stomach sleep. Thus, the best sleeping position is always back to sleep.

It is better to sleep together with parents on the same bed.

Sleeping with parents on the same bed is one of the major causes of SIDS, for adult’s bed is not suitable for a small baby to use. Plus, there is a great potential in getting baby overheating when sleeping on the same bed. Instead, he or she should be left on a separate sleeping condition, such as on a crib or on a bassinet. In a word, share a room but not share a bed!

The SIDS cannot be prevented at all.

The symptom of SIDS still keeps a myth, thus there are no direct solutions to cure SIDS totally. However, we can still take some positive actions on reducing the rate. Getting baby into a good sleeping habit is the best way to prevent SIDS, make sure his airway is always unblocked during sleep. Plus, never smoke around the baby.

Cope and Support on SIDS 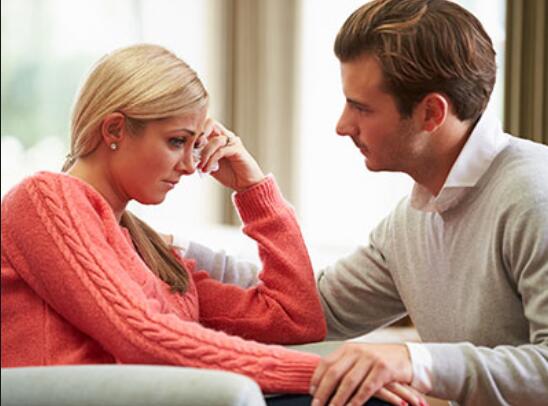 Losing a baby is a fatal sadness for each mom. For every year, there are thousands of moms fail to walk through the shadow and led a pathetic life. If, unfortunately, your baby is lost in SIDS, here are some positive actions you can take.

Never block yourself in a black room.

Open up your mind and try to communicate with others. All your friend and your family members are waiting full time talking to you. Love what can be loved now!

It takes time to heal.

Give yourself a limited time to digest the sadness, for it is not that easy to heal the scan. But it is nonsense to spend your whole life for mourning. Keeping a positive lifestyle and living condition is the biggest relief to the dead.

Divert your attention helps you relieve the pain.

If you decide to let it go, then you can divert your attention to something else, like painting, flowering, or some others that are on your hobby.